Headley deftly turns all expectations on its head in her novel "The Mere Wife". Beowulf is an indelibly masculine Anglo-Saxon epic of Beowulf has captured imaginations for centuries, and has clearly caught the attention of Headley, who masterfully weaves a powerful feminist perspective of the classic. 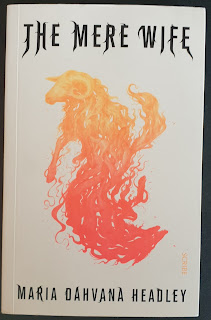 |
The setting is a modern commuter suburb called Herot Hall, below a mountain where Dana and her son Gren live. The isolated world of Dana and the social niceties of New Years Eve parties in Herot Hall are about to come to a head, as Gren, begins to explore the world around him with a different moral compass to most humans.
There is a lot of intelligent word-play which may pass some readers by at first sight, from the title "Mere" could refer to the lake by which Dana resides, or it could also refer to Willa's initial insignificance as a trophy wife.
The story is told through two voices, that of Dana, a traumatised former soldier, gone off the grid and taking the role of Grendel's mother, and that of the Queen of Heorot, Willa, a modern suburban community leader. The voices are distinctly different, with Dana's in the first person, almost ethereal in nature (particularly in the latter parts of the book), and Willa in the third person. It follows the clasic tale of Beowulf well through the prism of modernisation, with the main masculine hero called Ben Woolf, whose background reflects the testosterone-laden history of the original Beowulf. It is a slow-burner in the first half, but soon ramps up the pace. Whereas many adaptations of the Beowulf mythology forget about the third part, the dragon, this is not laid aside and is in fact vital to the conclusion of the modern re-casting.
This is a fabulous piece of work, and is to be lauded for the great work it has done for firstly bringing the book to a new audience, and secondly ensuring that the masculine tale is presented with a new, rich, female perspective.
Purchase it here: Amazon UK: "The Mere Wife" by Maria Dahvana Headley
Posted by Damon Lord at 1:44 pm