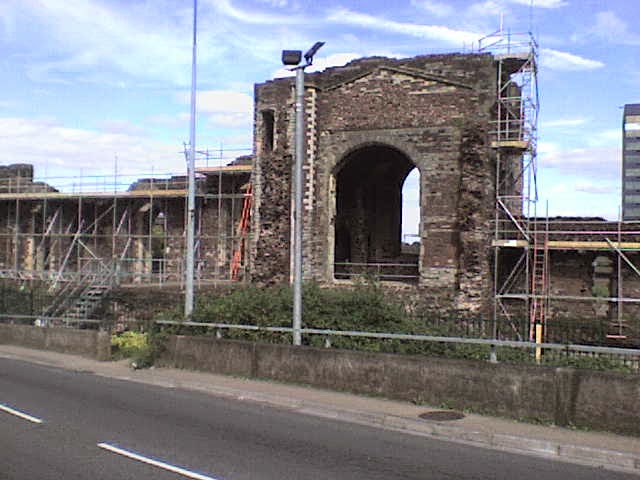 It is now in the exploration of language that I return to my hometown, Newport, in south Wales, to explore the the name of the city itself and so touch on the expression of the city's identity through the naming conventions for the urbis. I draw for the following text of this blogpost primarily from an academic study I did in 2007, comparing the castles of Newport with the Ortenburg in Bautzen, Germany. The photo of the castle is my own, taken in August 2007, on a mobile phone.

The role of the castle in Newport's identity is emphasised when one considers the linguistic aspects of the name of the city. The city is called Newport or (rarely) Newport-on-Usk in English, obviously signifying a new port and the city's links to the sea, as Newport originally was recording in 918 as “a mere fishing village with about fifty souls” (J. Matthews, 1910, Historic Newport, Newport-on-Usk, The Williams Press Ltd; p.84).

Casnewydd or (rarely) Casnewydd-ar-Wysg (Newport on Usk) is the Welsh name, harking back to previous naming conventions for the city, such as the Latin Novus Burgus(New Town), English New Castle and Welsh Castell Newydd(New Castle), from which the the current contractionCasnewydd derives (p.85).

For the Welsh aspects of the urban identity, closer ties have been kept onomastically to the castle. There has been some shift in identity in the naming conventions from the castle itself to the port aspect in English, although with the water-gate of the castle, there may be still be a nod to the fortification origin of the name.

In essence, in English it's a new port. In Welsh it's a new castle. The English name of the city thus portrays a different urban identity to that of the Welsh name, so we have two divergent identities onomastically displayed through the naming of the city, depending on which language you speak.
Posted by Damon Lord at 7:00 am