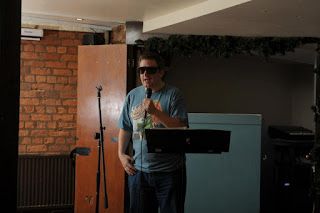 42 is a fabulous monthly performance poetry and prose event which, on 28 November 2012, focused on the flash fiction form at Drummond's/Swan with Two Nicks in Worcester. There were so many fabulous writers performing a total of fifty short stories, of all varieties and styles. The rules were that each work had to remain under 300 words, however, which was how it was so possible to cram so many pieces into a fast paced night, well lubricated by fine ales from the bar at the Swan with Two Nicks.

The highlight of the evening for me was listening to so many different writers. The star of the show was Calum Kerr, who had come all the way from Hampshire for the event, and read from his highly entertaining diverse flash fiction anthology Braking Distance.

I spent a fabulous evening there, and even got the chance to perform three of my pieces. to welcome acclaim. Geoff Robinson was as always on hand to take wonderful photos on the night, including the photo of me on this page.