Back in the 1980s, after I'd discovered that books had authors, and if a nine-year old could do it, then I could too, I began to write. I've been thinking a lot recently about the actual mechanics and tools of writing, so I'm going to just jot down a few notes here on how I did it then and now.

In 1989, I used to write in exercise books in my childish handwriting. A six-page story in my scrawl about rabbits was a (thankfully now lost) sequel to Watership Down, for example. When it got time to get serious and really up my game with writing, I did have my mother's typewriter that she used to use when typing letters for my late father when he ran his own business, but the machine that really stands out in my memory was my Nanna's typewriter. Nanna was my father's mother, and after 1986, the back bedroom in her flat became our playroom. One thing I remember about the typewriter was the weight of it. I used to haul out the typewriter into the living room with some difficulty, place it on the dining table, and begin. It was an old faded ribbon that needed replacing, but still did the job enough that it was still legible. It was a solid black ribbon on it too, not one of those half red, half black ribbons I had on my mother's typewriter. 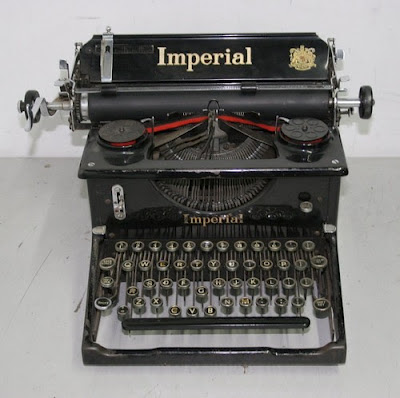 I used to type for hours, but one thing I remember from it was the amount of power and pressure that I had to apply to just type one letter. It meant that after spending a weekend at Nanna's house (she lived in a flat, but we still called it Nanna's house), the tips of my fingers would be really sore, and my nails too. It's probably the reason I started biting my nails back then. Often if I typed too fast, two keys would spring up at once and jam; that's one thing I particularly remember about it, and I'd have to reach in to the U shaped bowl of letter arms and pry them apart. The unreliability of typing at speed is probably why I have never learned to touch-type, and type using only two fingers on each hand.

Because I couldn't afford tippex/whitening fluid or whatever they called it, whenever I made an error I just back-spaced until I was over the necessary text and typed X repeatedly over the erroneous word. I used to type on the back of spare A4 typed reports of raffle results she had from the Red Cross, as my Nanna used to be a co-ordinator or something like that for some local pensioner social group for them in the 1980s. They would always come on different coloured paper, pink this month, blue the next month, yellow another month, but rarely, if ever, on white paper.

Moving on to computers in the 1990s, I found I had to reign myself in, as I found I was beating the keyboard too hard because of my experience with that machine. I'm still fairly heavy on the keyboard.

I often wonder what happened to that typewriter after my Nanna died in 1993. So you can see what a beast of a machine it was, the picture on this page is of a similar model currently on sale on eBay (picture taken from the eBay listing). I'm tempted to put in a bid for it, but it would be pointless.

These days, I use a thick Berol pen, huge handwriting (due to my poor eyesight) and a hardback, spiral-bound notepad bought from a local stationery shop. When not using paper (in fact most of the time when I write, in fact), I use a Windows 7 PC or Windows XP PC. The actual software for writing is the usual MicroSoft Office 2010 suite, but I have recently fallen in love with the free yWriter software too, so I'm using that more for my longer pieces. If I'm using my Linux machine (not very often these days), I use the free software Apache OpenOffice.

I do miss that typewriter though. I had some good times with that machine.
Posted by Damon Lord at 12:01 am