I love the Kindle 3G 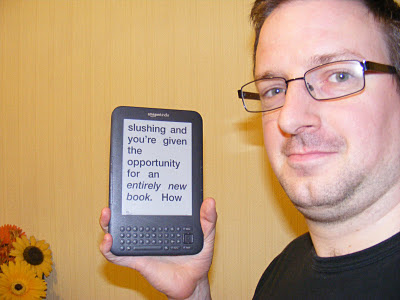 as Amazon labels it. I have to say it is a godsend. The picture shows me holding my Kindle, with the text displayed at maximum size whilst reading China Miéville's Un Lun Dun.

Quite simply, I love it. After my eyesight became problematic three years ago, I have had more and more trouble reading books, which is a real problem for a writer like me. The Kindler is the 21st century solution to this. A Kindle does have its advantages over books in portability, so you can carry hundreds or thousands of books in one go (whereas if you're travelling you're limited to one or two), and if you get the keyboard one with free 3G connection, you get the ability to turn your book into an audiobook without having to buy the audiobook separately (an ability lacking with a Sony ereader, for example).

The menus cannot be enlarged unfortunately, but you can also navigate the Kindle with a voice guide (on the 3G version) with spoken menus, descriptions and items. You have to turn on the guide separately, but you can then change between a male and female voice whilst actually reading a book, and this then applies the voice settings to the whole Kindle.

It also has the facility to access the web anywhere in the world for free, which is always a bonus, although there is a big downside in that text enlargement and read-to-me facility does not work with the web browser, so I have to resort to magnification to read the Kindle then. It also frequently freezes up and crashes when surfing the web, needing a reset to get the Kindle working again.

Another improvement would be if there was an option to invert the text. You only get the choice of reading black letters on white, and some people with visual impairments would prefer the inverse. It's not possible to do it on the Kindle itself, but it is an option on the desktop PC reader version of the Kindle.

Another problem with the Kindle is that the buttons on the keyboard are really and fiddly and difficult for me to see. With normal keyboards there are little bumps on the F and J keys that a visually impaired person can feel to know where they are on the keyboard and navigate accordingly. There are bumps on F and J, but they are so small and insignificant even the most tactile of people would have difficulty feeling the bumps.

Despite its problems, I can finally read books on the bus/train/plane/taxi/wherever for the first time since I became a blinky/speccy, without carting a laptop/PC or magnification equipment with me. I thoroughly recommend a Kindle.
Posted by Damon Lord at 12:02 am