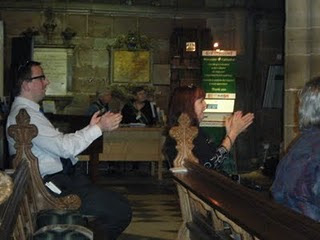 Crikey! I attended last night the opening evening of the Worcestershire Literary Festival. It was a wonderful night, with ten poets lined up as finalists for the title of Worcestershire's first Bard, which was won by Theo Theobald with two highly amusing poems. It was highly difficult for the judges to pick a winner. To be honest, if I had been judging, I reckon at least seven of them would have had to have shared the prize.

I did not know however that I was being watched! I went on to the Festival's blog to check out what's been going on, only to see my own ugly face as an audience member depicted clapping at the top of the page! Sat in front of me at the time (and also depicted in the picture) was Sylvia Herbert, who will be guiding a seminar on marketing and publicity for writers tomorrow, which I am looking forward to. At least it's a side view so the Festival goers don't have to suffer the full horror of my face!
Posted by Damon Lord at 8:00 pm