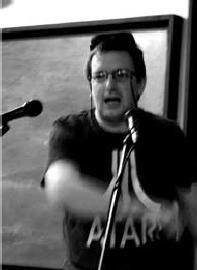 Well, after my recent performance at 42, a couple of reviews have now appeared. Of note is the pub reviews site Behind the Arras, which recently did a review of the night where I did a mix of stand-up SF comedy, a horror poem and a fantasy story. They said:

Damon Lord has one of the best opening lines I have heard: “When I type my name into Google, it says, Did you mean ‘Demon Lord?’”. This set the tone for much of his set, which was a tapestry of sci-fi stand up, which went down very well, interwoven with poetry and narrative.

A report on the event also appeared (page 14) in The Box, a Worcester local arts magazine. The photo is from that magazine.

I can't wait to perform my work again soon, and with the Worcestershire Literary Festival coming up, I should get the chance!
Posted by Damon Lord at 3:00 pm