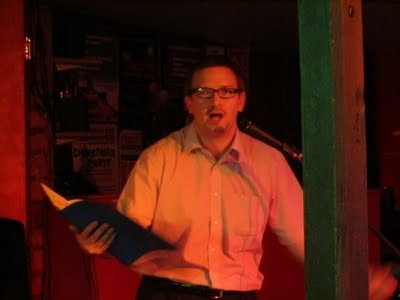 SINISTER SHORTS - NOIR STORIES: Don't forget, tonight's the night if you want to hear one of my latest dark fiction pieces in a night of Sinister Shorts - Noir Stories from the Worcester Writers' Circle. I'll be presenting my story at Worcester University (City Centre Campus, Castle Street, Worcester, WR1 3AS) at 7:30pm and tickets are available at the door for just £3!

70th BIRTHDAY PARTY: A number of events during th Worcestershire Literary Festival are being hosted by the Worcester Writers' Circle, who incidentally are celebrating 70 long, continuous years of writing, and will be holding a party this Sunday (26 June 2011, further details here). They will be launching their anthology, a wonderful collection of worthy work from various members (although sadly not including me, as I was too busy at the time with our young son to send anything in when it was being compiled).

WORCESTER LAMPOON: This is an event which has already taken place. On Wednesday 22 June 2011, I got home from work and I was rather bored, and not finding much stimulation from the jokes of Nick Owen on BBC Midlands Today. I therefore sat down and wrote an amusing poem, before then heading out to enjoy an evening of comedy called Worcester Lampoon. I had intended to just be an audience member, but on arriving I was told there was a gap in the programme that needed filling. Within two hours of the poem being written, I was on stage performing it (photo above courtesy of Sylvia Herbert; I'm just glad she didn't capture me in one of my more emotive moments during the performance!). Talk about last minute! It must have worked, as I have had some great feedback on it!

42 and PAROLE PARLATE: That's not all! If you like my work, then next week on Wednesday 29th June 2011 I will also be returning to 42, Worcester's Genre fiction Open Mic Night. I also have a slot at Parole Parlate in early July (details for these two events to follow in another update).

Addendum: I will not be performing at Parole Parlate in July due to unforeseen personal circumstances.
Posted by Damon Lord at 9:24 am