Thoughts on the colonisation of Space 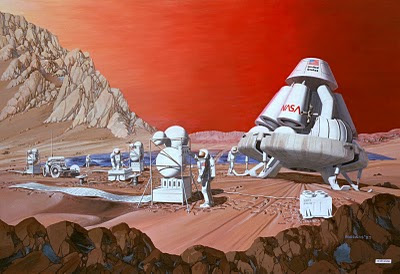 One of the most interesting themes in the exploration of Space is the survival of Mankind; in particular, our ability to explore and colonise new worlds. Whereas in olden times, the oceans, Americas, Africa and Australasia were variously for (European) Civilisations the new frontiers, it is evident that now Space must be the new frontier. I do enjoy reading these frontier stories, and particularly loved Joss Whedon's TV series Firefly, which encapsulated certain aspects of the new frontier of Space perfectly. It frustrates me to think that, on reviewing the history of Space exploration, that the drive to get out there into the black already lost significant momentum long before I was born, after the final Apollo moon missions. I would have thought that the Moon would have been a great springboard on to other things out there, but it never was.

Time is ticking by, as it has been over forty years since those brave Americans flew to the Moon, finally landing in 1969 for the first time. Pretty soon, there will be no-one left alive who knows what it is like too stand on another world. Whatever your politics, I was over the Moon (so to speak) when the US President George W. Bush announced the plan to return to the Moon with a permanent colony there and possibly on to Mars after that, and even more devastated when President Obama cancelled the plans. With Chinese plans forging ahead to go to the Moon, it actually makes me wonder whither the American national pride may have disappeared, with no American effort to beat the Chinese back to the Moon.

But it matters not who gets us, and us meaning Mankind as a species, back into Space, whether American, Russian, Chinese, Japanese, European or Indian. Well, maybe not the North Koreans, as they've got a majorly fucked up regime, but anyhow.... The UK had a space industry once, but again, it appears to have faltered many years ago, although there are still numerous efforts, not least is the wonderful private enterprise by Virgin Galactic. I doubt I would ever have the money to take a flight into Space with them, but I can but dream. It may well be that the return to the Moon and colonisation of our sleeping satellite will be ultimately a commercial endeavour, led not by national space agencies, but I don't exactly expect to see adverts by the English comedian Lenny Henry for Premier Inn's Tycho Crater branch.

But isn't space travel a waste of money? People think of teflon-coated frying pans as the benefit of the space age, but it would be wrong to use this oft-cited example, as there are many, many further benefits. Just with the almost dormant Space endeavours by Britain alone benefits have arisen, so in particular let's take a quick look at the UK's Beagle II mission. Although a mission failure in that the Beagle II disappeared as it headed in towards Mars on its final approach to the surface of the Arean globe, it did succeed on many other levels; just one instance is that as a result of research done for Beagle II by my alma mater, The Open University, they were able to shrink a mass spectrometer right down to the size of an A4 sheet of paper (so I was told at a formal OU after-dinner speech), making chemical analysis and screening so much quicker and portable, aiding detection of tuberculosis in third world countries so much easier.

But those are on-world benefits. There naturally would be even greater benefits for getting off-world. In the medium future, tourism would be a great thing that would drive further exploration and boundary pushing, as we have seen as mentioned with the new Virgin Galactic moving forward, but the need to get off-world is great. We've seen films like Armageddon and Deep Impact, where Bruce Willis and Elijah Eood respectively save the world from a rock from Space. They may be dramatisations, and such things are such remote possibilities that they would happen in our lifetimes that it makes organisations like Project Spaceguard seem almost a waste of time, but we can confirm that a planet-buster has hit before, after all it killed the dinosaurs, and it will come again. Ultimately, if the planet-buster does come before we are established as a species as a Space-faring people, then everything we have done, everything, will have been for naught. If the planet-buster comes and destroys the Earth, then we as a species would still survive on some far-flung rock, for example. It would be even better if ultimately colonisation was on some far distant world in another solar system.

So right now, Mankind needs to establish colonies on the Moon, then start looking at Mars. Its a close neighbour, and would make a good stopping point or refinery for the mining vessels that will inevitably plunder the nearby asteroid belt.

We should also be further afield out into the stars. The nearest star with currently detectable planets is Epsilon Eridani, just 10.5 light years away. If a probe were to be sent out in the next few years, depending on what velocity it was sent at, we soon (maybe a hundred Earth years; who knows? I can't be bothered to do the mathematics right now) might have something there to send back information on the Epsilon Eridani system and tell us if there's something in the Goldilocks zone, ripe for colonisation. If there isn't something there we have thus lost nothing because we can still gain valuable data on the system, and if there is something in the Goldilocks zone that would be useful, then we have gained everything.

We don't even have to necessarily colonise other worlds; giant structures such as habitable space stations and rings could be built in the vacuum of space itself, and the materials to build the structures could be mined and harvested from the asteroid belt and the Kuiper belt.

I'm not the only one to think that we should be getting out there. In 2001, Professor Stephen Hawking said: “I don't think the human race will survive the next thousand years, unless we spread into space. There are too many accidents that can befall life on a single planet. But I'm an optimist. We will reach out to the stars.”

Mankind's very long-term survival depends on expansion into space and expansion of knowledge. To protect our species' future, it should become an imperative goal of the various government Space agencies to establish permanent colonies on other worlds.