I just want to say a big thanks to my nearest and dearest, my beloved fiancée Angie, for her Christmas gift to me. It's had constant use ever since, and is the perfect gift for a writer.

What did I get? She got me a PDA! A Palm Z22 to be precise, a tidy little thing for writing, jotting stuff down, organising my diary, occasionally playing games, installing other programs (such as an astronomy program), etc. I've also downloaded lots of books to read into it, using the program ReadThemAll. Great for downloading H.P. Lovecraft stories and such like from Memoware.

It's a basic thing, as it doesn't have access to the web and you can't use it as a phone, or other distracting uses. It's simple, and does the job I need it to do, and that's for it to be mainly a writing tool.

I've been using to do my writing ever since Christmas thanks to its versatility and portability. It's been a godsend for writing, as it means I can do my writing almost anywhere now. Before, coming up with a good line to write for the WIP (Work In Progress) on the bus used to be difficult to jot down, but just whipping out the PDA t'other day as I rode home and I was soon into the story again, and had it written down before I forgot the important sentence I'd composed in my head.

The actual software I'm using for composing stories and writing is extremely basic; it comes with the Palm operating system software as standard and is called "Memos", with no fancy add-ons at all to distract you. And it is extremely basic, let me stress that. It's also good for the writer with obsessive-compulsive-word-check disorder, as it does not have a word count, but can store pretty hefty files in it. I'm not sure of the exact maximum amount of storage per Memo file for writing, but I downloaded a 5,000 word document into the PDA without issues, but it wouldn't have a 7,000 word document as it was apparently too large, so there are some limits, which can easily be overcome by splitting a long document into chapters or parts.

I had an inkling, of course, that I might be getting such an item for Christmas. I therefore managed to pick up the ultimate accessory, a wireless keyboard. God bless eBay; I only paid £7.01 for the keyboard! The keyboard is retailing for a lot more.

On the power consumption side, it's value for money. The battery lasts for ages too, and is charged either by connecting it dierectly to your PC or by an independent charger with interchangable heads, so useful abroad too! The battery lasts ages, and after a day of almost constant use, it had only gone down to about 50% battery. AAA batteries in the keyboard are still registering as full, nearly a month on, and apparently the batteries in the keyboard can last four months under heavy usage.

Time for a photo, methinks, so you can see what I'm on about.... 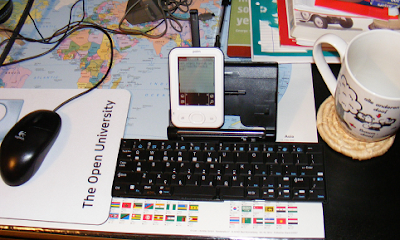 One further piece of advice, however if you get/have one of these: back-up, back-up, back-up! HotSync regularly with your PC or laptop, so that if it does crash (and from having previous Palm PDAs, the operating system is nearly perfect in my humble opinion and has far, far, fewer problems than Windows as an operating system, in my experience), you haven't lost your files.
Posted by Damon Lord at 9:08 pm