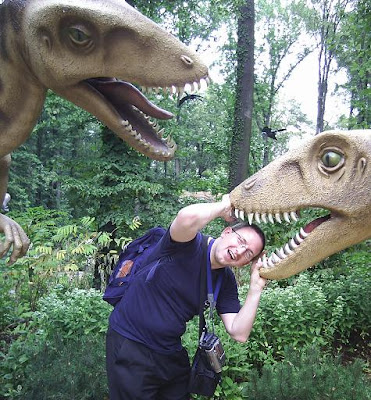 He divides his time between England and the Philippines with his wife, Angie, and young son. Unlike the stereotypical writer, he does not like cats. He was also exiled from his native Wales for the inexcusable shame of not being interested in the national sport of rugby. He has also been visually impaired since 2009.

Damon speaks numerous languages, having originally learned French in school, British Sign Language in an evening class and Esperanto in his free time when he was sixteen. He is always keen to learn more. He has variously concentrated on languages from diverse families globally. He read in a book that the inventor of the Volapük language, Johann Martin Schleyer, spoke 85 languages, so he has set himself the goal of being able to speak 86 languages before he dies.

Damon has been writing since the age of six. For a few years he took a break from crafting stories in order to study, completing his bachelor's degree in Humanities with English Language with the UK's Open University in 2007, gaining a Diploma in English Language Studies along the way with the same institution. As part of his studies, he also successfully completed a module (A174 for those interested!) in writing fiction. He returned to writing with renewed vigour in 2008, and is currently working on his second novel (his first is undergoing revision before eventual publication).

In 2012 and 2013, he was a finalist in the Worcestershire Poet Laureate contest where he placed highly, and will appear again as one of the six finalists in the 2014 contest. Third time lucky?

When not found writing dark poetry and speculative fiction, he speaks Esperanto and can be found cooking or learning obscure languages, and may even occasionally be observed holding down a day-job in IT.

If you are looking for Damon Lord the musician, that isn't me. For the Damon Lord who is a musician, click here to go to his music on YouTube.

Is that your real name?

Yes. Yeah, I know it sounds a lot like Demon Lord, which would be an even better name for a dark fiction writer like me. but it's not that. It's Damon Lord. And not Damien/Damian, either. So you can stop The Omen wisecracks now. I've heard it all before!

What's the deal with your studies? You said you studied at Miskatonic University, Caermaen Campus?

Ah, just a little joke, Miskatonic University being featured in the works of H.P. Lovecraft, and Caermaen being a place in the works of Arthur Machen, both of whom I thoroughly recommend reading.
Do you have an agent?

Where do you get your ideas from?

All around. Look around you; everything and everyone has a story, and thinking about things can inspire a story. It's a matter of asking questions of yourself, then playing with them in your mind.

Here's a few links to articles on where to get ideas for stories:

Any tips on writing?

Yes. Write. Write a lot. And keep at it, every day if you can.

Coupled with this is reading a lot. Make sure you read a wide variety of things, lots of authors, lots of genres.

And get involved with a site like Forward Motion.

I've got this idea for a story/poem/book/play/etc.; why don't I tell you my idea, you write it, and then we'll split the profits?

Sorry, no. Thanks, but no thanks.

Who designed your site?

Any criticisms and compliments on the web design are to be directed solely to me. I'm not a pro when it comes to web design, so I'm pretty happy with what I've got going on here. I took a template from blogger.com and manipulated it until I got what I wanted, and I'm rather satisfied with what I've got here at the moment.