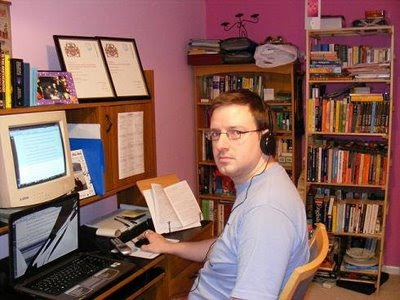 This is the first blogpost on my new writing blog. For those of you who've been following my main blog for the last two years over at Linguanaut.co.uk, you'll know I like to do a bit of creative writing now and then, so welcome to my new blog.

For new readers who've not met me before, welcome also. That's me in the picture, writing. The laptop screen's absolutely kaput, so I have to use an old monitor for typing. C'est la vie. Old or new friends, you are all welcome to stay a while, tarry whilst I muse on the writing craft.

Let me tell you a bit about my writing curriculum vitae for the moment. I started writing when I was a child, many moons ago. I was inspired by Jayne Fisher, author of the Garden Gang books, as I recounted in an old blogpost on my other blog, which you can read by clicking here. There was other writing, and about ten years ago, I had a story published in a book, as well as winning an award for poetry at sixth form college. I wrote various short stories in the 1990s, and was part of a writers' group called Basically Insane in south Wales for a while, but not so much writing since then, just an occasional article and tale since, and aborted starts at novels. I felt I was doing pretty well, maybe a bit of improvement here and there, but didn't really push myself further. With my academic studies (which finally ended about this time last year), I haven't had much opportunity to do much creative writing in the traditional sense; I got into the habit of putting my writing creativity into essays, but now I feel the urge to take up once more the writing habit, and write a bit of fiction.

This blog is my public commitment to return to creative writing and get back into it, return to the swing of things. In many ways, keeping a regular blog over the last two years (although I did name it an irregular blog originally) has meant that I already feel I can legitimately call myself a writer; my goal is to now develop my writing skills enough so that I may eventually also call myself a novelist.

To do that, of course, I have to write a novel. So it's time to outline the aims of this blog. It's going to be something of a medium to communicate with my potential readers, as well as being musings on the writing craft. It's also going to be a place whereby I can set out my personal goals.

Writing is important for me as an expression of myself. As mentioned above, I have probably attempted a million times to start, but it's time to actually take the plunge and see something through to the very end. That's one of my goals, to actually finish writing a novel (preferably by the age of thirty; I've got about six months to do it if the age of 30 is a goal). That's the plan, and the idea is that having got one under my belt, it should get easier after that. That's the theory anyway.

And here's another writing personal goal. A few years ago, in the Basically Insane writing group as mentioned earlier in this blogpost, I knew some good writers called Tim Lebbon and Gary Greenwood. I don't know if they remember me, but they're brilliant writers and I heartily recommend their works to you. Gary's had four books published now, I believe. And what about Tim? On 1st December 2008, just as I was celebrating my second anniversary of taking up blogging (and thus in theory having been able to call myself a writer for two years), coincidentally I noticed that Tim celebrated being a full-time writer for two years and has now written something like a million books. My congratulations to Tim! He's an inspiration. So there's another goal, maybe a pipe-dream, maybe not: To eventually earn enough writing to give up the day job to write full-time. Not likely, but hey, I can dream....

And indeed I can dream. It's just a matter of turning those dreams into words on paper (or in the twenty-first century, words on screen), and hammering out the prose.

Join with me as I embark on a new adventure, as I begin my musings on the writing craft.
Posted by Damon Lord at 11:00 pm